Fancier mushroom risotto (vegan or not)

Thanks to Fetch Rewards for sponsoring this video! Download the Fetch Rewards app now → https://fetch.thld.co/ragusea_0822 and use the code RAGUSEA to get 5,000 points on your first receipt!

My old video about why dried mushrooms are so much stronger than fresh: https://youtu.be/JFH5Zpe0p1Q

1/2 cup (100g) risotto rice per portion (arborio, vialone nano, canaroli, etc)
1 pound (454g) fresh mushrooms per portion (get some big ones, like king trumpet, to use for garnish, and some smaller ones to put in the rice)
1 handful of fragrant, cheap dried mushrooms per portion
1 big shallot for every two portions
a couple garlic cloves per portion
olive oil
vinegar (I used white balsamic but anything is fine)
white wine (optional)
cognac or any other barrel-aged spirit (optional)
butter (optional)
parmesan cheese (optional)
vegan sour cream (if you're not using dairy)
truffle oil (optional)
fresh herbs for garnish (I used tarragon, but thyme or sage would be nice)
bay leaves (optional, no idea if they do anything)
mustard seeds (optional)
salt
pepper

First make the mushrooms stock. Combine the dried mushrooms and a few bay leaves with about 2 cups (473mL) water per portion, a big pinch of salt per portion, bring to a boil then reduce to a simmer. Simmer for 30-60 minutes, strain out the solids and discard them. (If there was a lot of sand on the dry mushrooms, you can either pass the stock through a coffee filter or just let the sand settle on the bottom and pour off everything but the last little bit.)

Prepare the fresh mushrooms by cleaning off any dirt and trimming off any woody stems. The large mushrooms that you plan to use for garnish, cut in half lengthwise and, optionally, score the cut sides like I do in the video. Marinate those with a little olive oil, vinegar and salt and pepper. The smaller mushrooms, cut down in size if necessary to make them all about the same size and so they'll cook quickly and blend in well with the rice.

Peal and dice the shallot. Crush and peal the garlic but do not chop it.

You can either cook the fresh mushrooms in advance, or do it while the rice is cooking, like I do in the video.

When the stock is done and you're a half hour out from dinner, fry the shallots for a minute in some olive oil over moderate heat. Stir in a big pinch of mustard seeds per portion and let them fry. When the shallots have softened a little, stir in the dry, unwashed rice and fry it for a minute. Deglaze with enough white wine to just cover the rice and stir until absorbed. (If you're not using white wine, maybe spike the mushroom stock with a little splash of that white balsamic vinegar per portion and use that instead.)

Pour in enough of the mushroom stock to cover and let the rice cook, stirring occasionally, until the grains are just a little crunchy, adding stock as needed, 15-20 minutes. If you run out of stock, water is fine.

While the rice is cooking, heat a thick layer of olive oil in a pan over moderate heat and put in the big marinated mushrooms, cut-side down. When the cut sides have browned, flip the mushrooms over, put in the garlic cloves, and use a spoon to baste garlicy hot oil over the mushrooms until they've shrunk at least by a third and they look cooked. If you're down with dairy, I'd melt some butter into the pan for the basting stage. Leaving the hot fat in the pan, remove the mushrooms to a plate and take out the garlic cloves before they burn.

Put the smaller mushrooms into the pan, season with a little salt and pepper, and cook until brown and shrunk by at least a third. Deglaze with a little cognac (or white wine, or stock, or water), coat the mushrooms in the resulting syrup and turn off the heat.

When the rice is almost done, turn off the heat, stir in the smaller mushrooms and as much butter and grated cheese as you want. If you're not using dairy, try cook the risotto so that it looks a little too dry at this stage and enrich with a one or two big scoops of vegan sour cream per portion (it will add moisture, which is why it's good to start with a slightly dry risotto). Tear in the fresh herbs, stir, taste for seasoning and add salt/pepper if necessary. Stir in a little water/stock if the risotto is looking too tight.

Scoop the rice onto plate, smooth off the surface and garnish with the bigger mushrooms. Serve with steak knives to cut the bigger shrooms.

Fancier mushroom risotto (vegan or not) 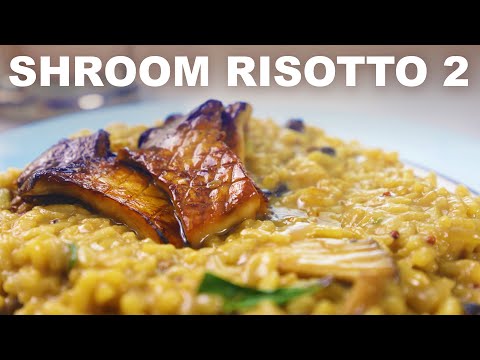 Thanks to Fetch Rewards for sponsoring this video! Download the Fetch Rewards app now → https://fetch.thld.co/ragusea_0822 and use the code RAGUSEA to...